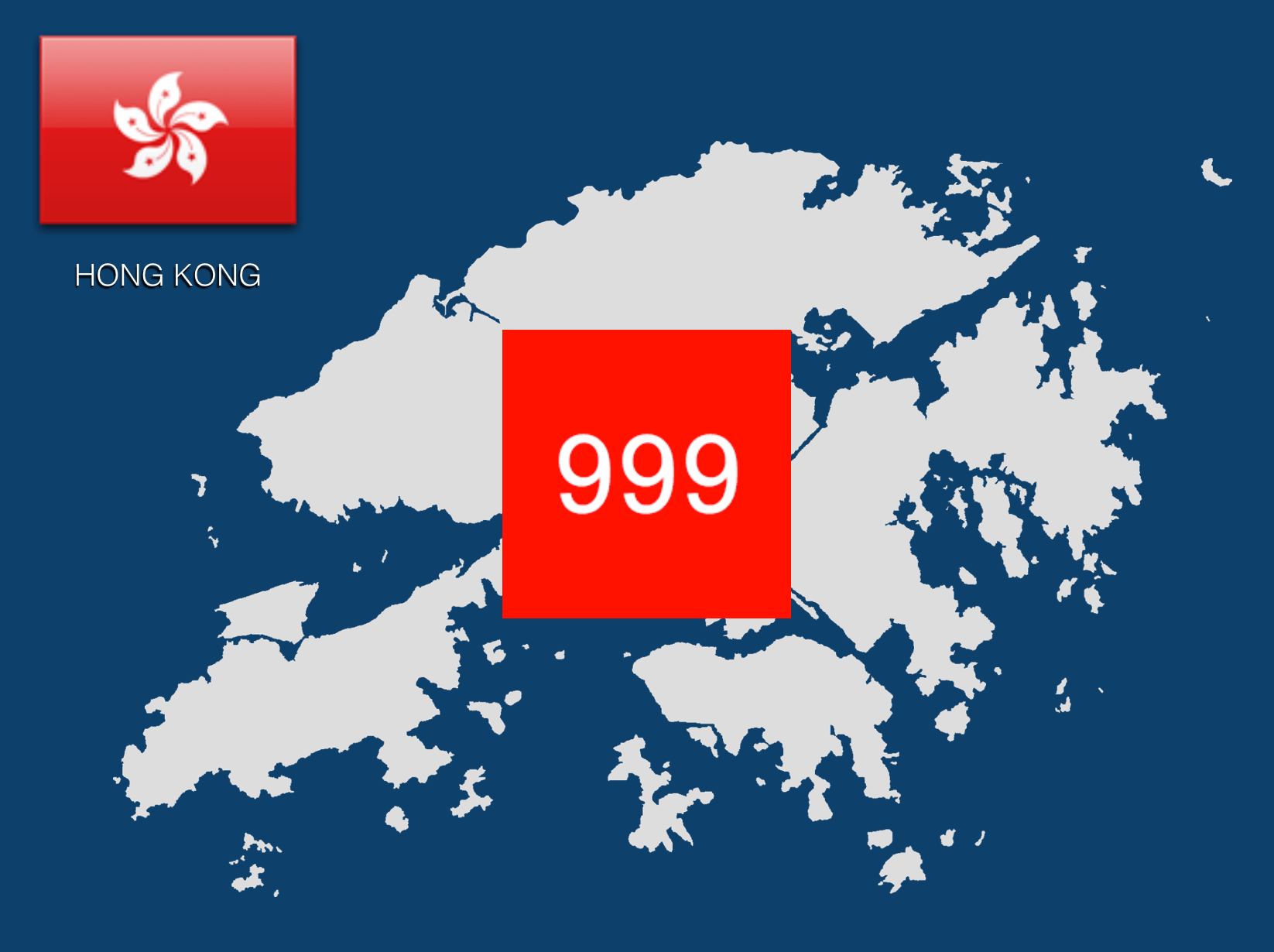 DIAL 999 TO CALL AN AMBULANCE IN HONG KONG

% of Emergencies Attended to Within 12 Minutes

HOW CAN I CALL AN AMBULANCE IN HONG KONG?

HOW DO I CALL FOR HELP?

DIAL 999 TO CALL AN AMBULANCE IN HONG KONG

CAN I CALL FOR HELP ANYWHERE?

Yes. 999 is available across Hong Kong through the Fire Services Department, which are divided in two regions further split into four subdivisions. Each division has “approximately 300-400 staff in 4-7 ambulance depots” (Graham 2009).

WHAT ABOUT IN DISASTERS?

You should still call 999 during disasters, as Hong Kong’s unified command center can be turned into an emergency operations center (EOC) during large scale events.

In addition to coverage by the Fire Services, there are also volunteer EMS organizations that provide disaster response and relief services:

ARE THE RESPONDERS TRAINED?

Yes. It is required to have completed formal training prior to working on an ambulance in Hong Kong. There are several levels of training available for emergency responders:

Chinese University of Hong Kong has provided independent postgraduate diploma and Master of Science degree in Prehospital and Emergency Care since 2005.

First Responder Program – Launched in 2003, this program trains firemen to BLS level for care prior to ambulance arrival

HOW WILL I GET TRANSPORTED?
Depending on where you are, you may be transported by ambulance, boat or helicopter.

Hong Kong’s ambulance fleet has been “fully equipped and manned at [advanced provider] service level since March 2005” (Graham 2009) and use three types of response vehicles:

Standard Transport Ambulance – Mercedes-Benz Sprinter staffed with three ambulance staff — one driver and two trained emergency technicians, at least one of which is EMA II-level provider.

Mobile Casualty Treatment Centers (MCTC) are mobilized for incidents requiring more than four ambulances; stocked with medicines and supplies above and beyond the standard ambulances they can set up small clinical area which also function as an operating theater. The MCTCs respond to calls “limited to life threatening ‘ABC’ conditions, when an ambulance is unlikely to reach the scene within the 12 min target response time” (Graham 2009)

Fixed-wing and helicopter EMS (HEMS) are available through the Government Flying Service which provides transport from scene to hospital, between facilities as well as search and rescue for Hong Kong and surrounding water. Personnel are rained to a BLS level and works in coordination with Ambulance Command, though is managed independently. An Air Medical Officer (AMO) program is used to staff the service with volunteer specialist emergency physicians and nurses on holidays and weekends. To contact the Government Flying Service in case of an emergency, dial 999.

WHERE WILL I BE TRANSPORTED TO?
HOW WILL I PAY?

According to the US Centers for Disease Control and Prevention (CDC), different groups of travelers will require different vaccinations for travel in Hong Kong:

This database is intended for people who want to know how to call an ambulance in different countries – a question we happen to be trying to answer ourselves every day.

Any data, links, reports, assessments, opinions or other pertinent information regarding the contents of these pages should always be double-checked with the source directly. If you’d like to contribute, we’d be very happy to have the help – please send us an email!

CONTRIBUTE TO THE DATABASE

NOTE: Trek Medics International assumes no responsibility or liability for the accuracy of the data posted here, nor for the professional ability, reputation of, or the
quality of services provided by the persons, entities and/or institutions included in our database. Inclusion on this list is in no way an endorsement by Trek Medics. The person contracting the service is responsible for payment (i.e. Trek Medics does not pay).