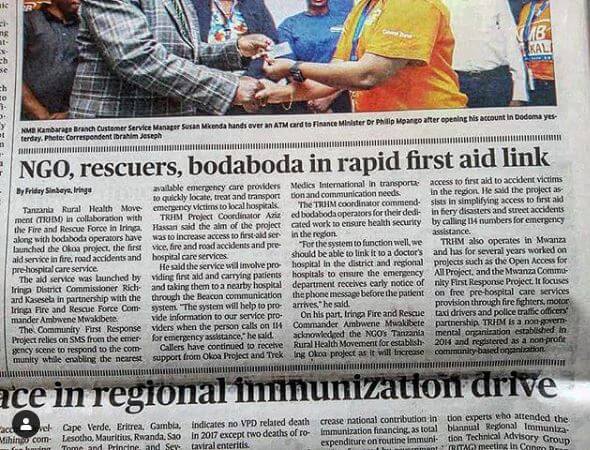 Tanzania Rural Health Movement (THRM) in collaboration with the Fire and Rescue Force in Iringa, along with bodaboda operators have launched the Okoa Project, the first aid service in fire, road accidents, and pre-hospital care service.

The aid service was launched by Iringa District Commissioner Richard Kasela in partnership with the Iringa Fire and Rescue Force Commander Ambwene Mwakibete.

The Community First Response Project relies on SMS from the emergency scene to respond to the community while enabling the nearest available emergency care  roviders to quickly locate, treat, and transport emergency victims to local hospitals.

TRHM Project Coordinator Aziz Hassan said the aim of the project was to increase access to first-aid service, fire and road accidents and pre-hospital care services.

He said the service will involve providing first aid and carrying patients and taking them to a nearby hospital through the Beacon communication system. “The system will help to provide information to our service providers when the person calls on 114 for emergency assistance,” he said. Callers have continued to receive support from The Okoa Project and Trek Medics International in transportation and communication needs.

The THRM coordinator commended bodaboda operators for their dedicated work to ensure health security in the region.

“For the system to function well, we should be able to link it to a doctor’s hospital in the district and regional hospitals to ensure the emergency department receives early notice of the phone message before the  patient arrives,” he said.

On his part, Iringa Fire and Rescue Commander Ambwene Mwakibete acknowledged the NGO’s Tanzania Rural Health Movement for establishing the Okoa Project as it will increase access to first aid to accident victims in the region. He said the project assists in simplifying access to first aid in fiery disasters and street accidents by calling 114 numbers for emergency assistance.

THRM also operates in Mwanza and has for several years worked on projects such as the Open Access for All Project, and the Mwanza Community First Response Project. It focuses on pre-hospital care services provision  hrough fire fighters, motor taxi drivers, and police traffic officers’ partnership. THRM is a non-governmental organization established in 2014 and registered as a non-profit community-based  organization.