A RUNAWAY TRUCK ON A CROWDED CITY STREET***

On Monday, January 16, 2012, at 9:30 p.m., a garbage truck coming down Route de Delmas in Port-au-Prince, Haiti, lost its brakes and careened off several vehicles before running over a crowd of pedestrians, including street vendors, motorcycle drivers, and passers-by. As quickly as the driver had realized that his brakes were failed, 45 people were killed – 29 instantly – and 41 more were injured.

Bystanders on-scene were first to initiate rescue; and, thanks in large part to the central location of the wreck, first responders and hospitals were alerted by mobile phone, television, and radio, enabling them to dispatch all available resources almost instantaneously.

For a city without coordinated prehospital care, efforts by first responders and bystanders were noble. However, the lack of coordination and resources served to highlight the deficiencies in emergency care that are in urgent need in the prehospital setting. And, in the instances when first responders were able to retrieve and transport patients successfully, the hospitals were equally unable to afford the patients a dignified level of basic emergency care – six additional patients were reported to have died in the hospital, and an unknown number died en route. Yet the hopes that the Delmas 33 tragedy was a one-time event were definitively dismissed the next day when Médecins Sans Frontières (MSF) was quoted as saying, “each week, [we] receive an average of more than 300 road accidents in [our] three hospitals…”. If those numbers are at all representative of the other Port-au-Prince hospitals, than it is likely that the Delmas 33 tragedy was indicative of much larger problems with road safety.

WAITING ON AN AMBULANCE
If you happen to be part of the unfortunate many that require emergency medical care in Port-au-Prince, it may be a long wait for an ambulance. Most people find it easier to go straight to the hospital, taking the first available vehicle. The national government is working to improve access to prehospital care as it can, most notably through the re-opening of the Centre d’Ambulance National, (prompted, in large part, by a donation of 35 Landcruiser ambulances by the government of Brazil.) And though the ambulances could potentially improve access, these vehicles have significant limitations, and demand great resources to keep them on the roads.

However, if the goal for Port-au-Prince is a conventional EMS system similar to other major urban centers in North America or Europe, the desired results will most likely come haltingly, at best. Such predictions should not be surprising: any view of the city, from one end of Route de Delmas to the other, or along any of the roads that snake up the slopes beside it, will illustrate how difficult traditional ambulance dispatching would be. Objectively speaking, the city’s geography, roads, and traffic pose the biggest problems: nearly 40% of the city’s population is inaccessible by road; much of the city’s existing roads are perpetually congested and typically allow for only one lane of traffic in each direction; and, the roads that do exist are largely non-ambulance-friendly. As a result, the standard ambulance ratio of one:50,000 population, if achieved, would increase costs exponentially, and slow traffic still more.

Even where the roads are suitable for traditional ambulances, the expectations for success should still be tempered: if solutions rely on the boomerang approach to ambulance dispatching – where ambulances seek out and retrieve emergency patients to bring back to the hospitals – the costs will likely accrue far too rapidly to determine any effectiveness in patient outcomes, and would likewise guarantee that many of the city’s most isolated (and) impoverished communities would be denied access. In short, Port-au-Prince essentially represents an ambulance-hostile environment, forcing policy makers to reconsider how patient transport can be most effectively delivered; if the options are an EMS system similar to those in North America and Europe or nothing, there will be very few who benefit. EMS systems as they are understood in affluent countries simply cannot be successfully implemented in a city like Port-au-Prince – no matter how many ambulances are bought. 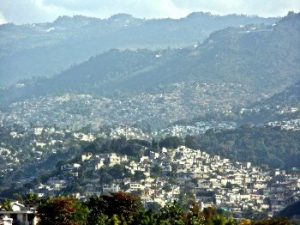 COMMUNITY-BASED RESPONSE
Definite, tangible solutions do exist to permanently improve Port-au-Prince’s emergency response services, and such solutions are within reach. But unlike North American and European EMS systems, ambulance cannot be expected to do all the work, and would likely have the most benefit if they are restricted to pre-determined roles (like inter-facility transfers or in a relay configuration) and kept on pre-approved roads. In any case, the need to explore alternative EMS delivery models is imperative; the young man with a traumatic brain injury that we came across is a good example of how emergency transport could be more effectively delivered in Port-au-Prince. And, to make the most out of local and international assistance, and to prevent further fragmentation, the Ministry of Health could consider developing a framework structure for emergency response at the community level, including the development and dissemination of an original, bi-lingual Creole/French training program for community first responders. Such an approach could provide an opportunity to develop a system that meets local healthcare and cultural realities, yet also provides opportunities for international organizations to contribute without taking away from long-term, coordinated development.

Similar solutions were identified during an After Action Review for the Delmas 33 incident, organized by the Ministry of Health (MSPP), University Hospital (HUEH) and International Medical Corps. The review listed several substantive solutions needed to improve coordination among prehospital and clinical providers, many of whom were in attendance including the Proteccion Civile, Port-au-Prince Fire Department, the Haitian Red Cross, MSF, Project HOPE, and Johanniter Int’l. Proposed solutions included uniform training with interagency exercises, interoperable communications, clear chains of command and medical direction, and protocols for treatment and transport, all of which currently do not exist. For a city as big, and with as many obstacles as Port-au-Prince, coordination will be an essential part of any improvements in their formal services.

Local community responders, like the Rezo Medikal Ayisyen (Haitian Medical Network), a grassroots community-based emergency response team, have found strong international partners to assist in creating momentum at the field level for more widespread implementation of emergency care services, including EMPACT Northwest, who have been funding a hospital-based EMS service and training program since the earthquake at Bernard Mews/Project Medishare hospital, and Johanniter International, a development organization based in Germany, has also been involved in disaster risk reduction training. Yet without clear leadership, guidance, and support from the Haitian government, and coordination with the international community, these efforts will be limited in their long-term success.

Trek Medics continues to support efforts in Port-au-Prince through our colleagues in the National Ambulance Center and with international partners, including EMPACT Northwest. An effective emergency care system is underway, and the proverbial bumps in the road have forced us all to reconsider the best way forward in Port-au-Prince EMS and, like a trip up Route de Freres, we’re confident we will arrive.

***:[This post is based largely on Jason Friesen’s experiences living in Port-au-Prince, Haiti, where he worked for Project HOPE as Country Director until July 2012. Project HOPE’s work in Haiti since the earthquake has focused on care for the injured, including physical rehabilitation and emergency care development programs.]