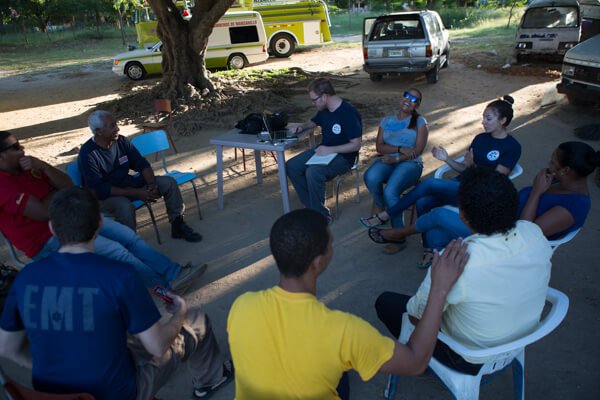 How a Peace Corps Volunteer Launched an EMS System

One sunny afternoon, I was sitting with my neighbors drinking coffee in our plastic chairs trying to catch a breeze. I had been in site for nearly six months and felt that I had a pretty good grasp on the dynamics of the place. The hospital administrator rolled up to our growing street gathering and took his place in the low-back plastic chair on the corner. “Bea,” he said to me, “I need a favor. We need an ambulance for the hospital, can you get us one?”

Fast forward to nearly two years later and I never did get that hospital administrator his ambulance, but what we did do together as a community was create an emergency medical system staffed by local first responders who use a basic mobile phone software to provide pre-hospital care to emergencies in my site of Manzanillo in the northwest corner of the Dominican Republic.

But let’s back up!

After that fateful conversation I had that afternoon with the hospital administrator, fondly known as Papito, I started investigating the idea of an ambulance donation. I did a Google search and sent a mass email to friends and family back home. I also sent many emails to organizations I read about online and one finally took the bait! Little did I know this connection would turn into a full-blown emergency response system project (and subsequently sour me at the idea of ambulance donations as legitimate forms of aid). I heard back from Trek Medics International, an organization dedicated to “improving emergency medical care anywhere.” And so I began a series of intense conversations with the executive director, Jason, who pushed me for more specific answers to my “Can you donate an ambulance?” question. As it turned out, when I dug a little deeper within my community, I teased out from the hospital administrator that what we really needed was a collaborative solution to the actual problem of inadequate pre-hospital care and a lack of reliable inter-facility transfer capacity.

So, I’d found the jackpot organization that could help me tackle this – now what? After a series of conversations between community members, we unanimously agreed to invite Trek Medics to send a team down to investigate the possibility of starting a pilot program. One thing led to another and the big boss, Jason, decided that Manzanillo was the perfect place to launch their newly developed Beacon technology (essentially a way to crowdsource transportation and medical attention, like emergency Uber). Working under the supervision of the local fire department, we gathered recruits who had to interview, study, train, and perform simulations for several weeks before we allowed them to “graduate” as community first responders. Simultaneously, I was training local dispatchers and working with the fire chief, Ramoncito, to give the fire station a central role in the new service as dispatchers of local emergencies.

The team of responders (fondly referring to themselves as “paramedicos”) also had to prove themselves as reliable partners with real skin in the game. For example, they initially offered to help the local civil defense during Holy Week and

stationed themselves for service at the beach when the holiday crowds flocked to Manzanillo’s beaches. There they encountered a number of patients with problems ranging from wounds to dehydration and intoxication. While no serious patients were treated (thankfully), their simple presence on scene proved to be a small but critical first step in their growth: it showed the community that the response team was more than just a good idea, it built their confianza (trust) in our new service exponentially.

Then we had to start giving our responders bigger tests so we knew we could safely grow. This included: handling simultaneous emergencies; ensuring that a sufficient number of available first responders were distributed equally as the coverage area expanded; training our team members as instructors in order to train neighboring communities, introducing a new version of the Beacon software funded by Google and learning to use newly minted motorcycle ambulances the organization donated to our local fire station. On and on it went… one good idea snowballing into a thousand more – all community-driven to make a well-oiled emergency medical system.

There is still so much to do but for something that started as a simple conversation over much-too-sugary coffee, it is now the primary method for emergency transport in my rural community. Today, six months from the date I finished my service in the Dominican Republic and have moved on to a similar Peace Corps Response position in Panama, we still have a fully functioning emergency medical service in Manzanillo and have expanded (with help from USAID and other generous organizations) to the entire province. Locals are the crux of the organization and run the entire operation. This was a project that never would have functioned without a vested community interest (especially as I knew nothing about first aid myself before it started!). Key community members were part of every decision and the driving force excited about this organization’s entry into Manzanillo. After initial contact with Trek Medics, I became a critical community organizer but I was never the driving force. As Jason reminded me various times throughout the process, “We can’t want it more than they do. They have to be a part of every step.” A very valuable life lesson, indeed, especially in the realm of international development.

Bronwen Raff was born and raised in Hailey, Idaho. She left the mountains to study Peace & Justice Studies and Community Health at Tufts University and traded city life shortly after graduation to serve as a Community Health Volunteer in the Dominican Republic. She refused to return home to cold Idaho winters and is currently serving as a Peace Corps Response Volunteer in the jungles of Panama. Besides training indigenous health promoters, she engages in mango eating, chakra weaving and ukulele learning.