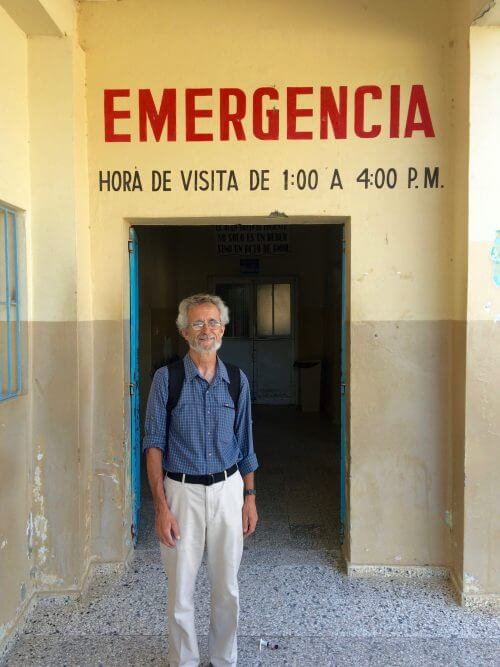 “Why not? I don’t have much else going on at the moment.”

William Prescott, PhD, is Trek Medics’ lead software engineer and longest-serving staff member. Will joined the Trek Medics team at the very beginning, after 30 years of groundbreaking research as a geophysicist with the U.S. Geological Survey.

When Will first signed on in 2013 to help us out with a new software program we wanted to develop, he did so by saying, “it sounds like a fun little project and I don’t have much else going on at the moment.”

Seven years and thousands of traveled miles later, Will now likes to say that Trek Medics is like the Hotel California: You can check out any time you like, but you can never leave. What began as a part-time, volunteer gig working on a simple text messaging software has turned into leading the development of a sophisticated dispatching platform that’s now alerting and coordinating emergency responders in nearly 20 countries around the world.

To label Will simply as our lead engineer would be a great disservice: He’s been a valued mentor, friend, traveling companion and sometime therapist, whose full life story would need multiple volumes to fit.

We hope that this modest profile can be a small addition to that great work in progress.

From the Wilderness to the Computer Lab

Will grew up in Anchorage, Alaska, and was always fond of science. As a kid, he thought he wanted to be a doctor, but by the time he finished high school his goal was to be a mathematician. A high school guidance counselor knew about universities on the East Coast and suggested to Will that he might look into them — something he had never considered. “Growing up in Alaska, I was totally ignorant about schools on the East Coast. On my counselor’s suggestion, I applied to Dartmouth, Middlebury and Williams. Middlebury was the only one that admitted me. The only thing I knew about it was that it had its own ski area. In those days, private colleges were not that expensive. I paid the last semester myself with earnings I made over the summer, $1,100 tuition, board and room — about $8,500 in 2020 dollars.”

In high school he had read about computers, but Middlebury was the first time he actually had hands-on experience using a real computer: “In 1963, when I was a freshman at Middlebury College I took a programming class from Prof. Ballou, who started Middlebury’s first computer course, “Introduction to Digital Computers“. I also had a job working as an assistant for the class. My job was to take the punched card decks produced by the students, and put them in the mail. They were mailed to MIT where they were run on an IBM 7094 mainframe computer. A few days later we would get the output back in the mail. I would take the printed output, which came as one long strip of paper, 132 columns wide, with the pages separated by perforations. I would split it up into the output of the individual students in the class, wrap it around the card deck that belonged to them, and put it in their mailbox.” 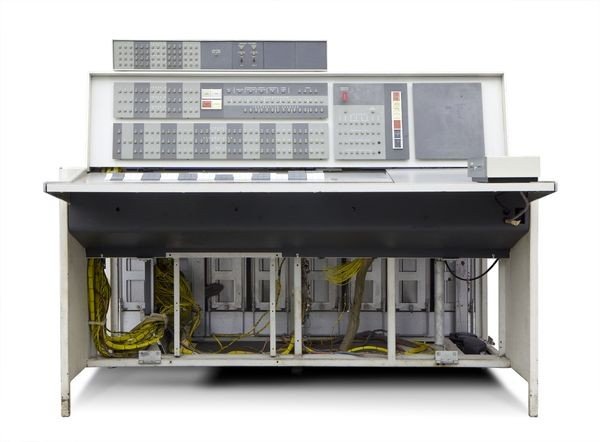 On the Frontlines of Modern Technology

After getting a Bachelors degree from Middlebury, Will moved to California with his new wife to start a PhD program at UC Berkeley. A year later the US abolished student deferments for the Viet Nam draft for grad students and two weeks after the law changed, Will received a draft notice. An avid objector to the Viet Nam war, Will had a family, so when he got drafted he chose to avoid jail and accept the terms of his draft. As he wrote in the letters he was sending back home from Viet Nam, “My age of 24 made me half a dozen years older than most of [the other soldiers]. At the end of basic training, all of the men in my basic training group with 20/20 eyesight were assigned to the infantry. Those of us needing glasses were assigned to the artillery and sent to Ft. Sill, Oklahoma, for advanced training.”

“In Vietnam, I was assigned to Battery D, 13th Artillery, 25th Infantry Division. For the first time in my short Army career, someone noticed that I had more education than the average draftee. Instead of putting me on one of the four 155 mm howitzers… I was assigned to Fire Direction Control, a fifth section that was responsible for communicating with the people requesting artillery fire, calculating the gun elevations and deflections, and controlling the fire.” Will soon found himself working on another computer. This computer, about the size of a desk, was called a Field Artillery Digital Automatic Computer (FADAC), and was used to compute elevation and deflection for aiming the guns. The 3-kilowatt generator that the artillery used to power the FADAC had to provide a very consistent current, while the angles of elevation and deflection were coordinated with longitude and latitude points. Finally, bags of explosive were added and subtracted to control velocity, and the earth was made to shake — a brutal, yet very tangible introduction to geophysics.

From Man-Made to Natural Disasters

In 1970, Will left the Army and returned to the U.S. and his family to settle down in Berkley, CA — a place that, in many regards, was the epicenter of the anti-Viet Nam movement. Will returned to the University of California, Berkley, to work on a PhD degree in mathematics, but like so many returning veterans, adjusting back to civilian life for Will took time and he failed the PhD qualifying exams and, in 1971, was given a masters degree as a consolation prize.

After graduation, he took a job as a research scientist with the U.S. Geological Survey. Using funds made available through the G.I. Bill, six years into his career at the U.S. Geological Survey, he changed to part time and made a second try at getting a PhD, this time successfully, getting PhD in geophysics from Stanford University in 1980. Of his work at the USGS, Will comments: “I studied movement of the earth’s crust caused by volcanoes and earthquakes. The primary effort was an extensive field program all over the western U.S.: California, Washington, Montana, Idaho, Nevada and Alaska. We used geodetic techniques to measure deformation of the earth’s crust. The first efforts were with laser electronic distance measuring (EDM) instruments. Then when GPS* became available we converted to that.

“We also had some work from the Atomic Energy Commission [later reorganized as the Nuclear Regulatory Commission], studying how the nuclear testing at the Nevada Test Site deformed the ground, as well as studying ground stability at the Hanford site in Washington State.”

While at the USGS, Will continued to get his hands on the latest computers, both for work and personal use:

“The first personal computer I had was an LNW 80, in maybe 1977. It was a clone of the TRS 80, a computer made by Radio Shack. The LNW 80 came as a kit that I put together. In 1984, I bought the first model Macintosh that Apple made, the one from the famous Super Bowl commercial. It had 128 KB of memory. I’ve been using Apple computers ever since.

“In about 1980, I purchased 5 GPS instruments for the USGS. Each one cost $161,000 and came in two boxes weighing 40 pounds apiece. To use it you needed a 12 volt car battery. We were using a Digital Equipment VAX-11/780. Still punched card input. If I needed more than 256 KB of memory, I would go to NASA Ames at night and run programs on their machine.”

In 2002, Will left the USGS to take a job as the first full-time President of UNAVCO, a consortium of universities carrying out geodetic research. UNAVCO formed under the auspices of other organizations in 1984 when GPS became available, as a way to share GPS instruments that were too expensive for individual universities to purchase on their own. By 2002, it was a subsidiary of the National Center for Atmospheric Research (NCAR) in Boulder, Colorado. “In 2002, it was reorganized as an independent non-profit organization and I was hired to lead it. I inherited about 20 employees from its former version. I was President of UNAVCO during a major initiative called Earthscope.** UNAVCO had responsibility for the Plate Boundary Observatory (PBO) part of Earthscope. As a consequence of scaling up to implement PBO, UNAVCO had grown to about 130 employees by the time I left in 2007.”

* “The GPS instruments used for geophysical research are not the same as the ones you find in a phone or a watch. They are also different from the ones used by land surveyors although there may be some overlap there. The instruments used for geophysics are high precision versions of the more common GPS receivers that are everywhere today. They cost a few thousand dollars apiece and weigh a kilogram or so. They use interferometric techniques and measure position with a horizontal precision of less than a millimeter and vertical position with a precision of a few millimeters.”

** EarthScope (2003-2018) was a program of the National Science Foundation (NSF) that has deployed thousands of seismic, GPS, and other geophysical instruments to study the structure and evolution of the North American continent and the processes that cause earthquakes and volcanic eruptions.

Crossing Borders as a Reverse Migrant

After leaving UNAVCO in 2007, Will joined the Peace Corps and was assigned to a project that marked a new partnership between the U.S. and Mexican governments and organized between two scientific research organizations. Unlike other Peace Corps placements, this one was only open to advanced science degree professionals with commensurate work experience. For two years, Will worked as an advisor to the Comisión Nacional Forestal (CONAFOR), the Mexican forest service, where he mentored three Mexican scientists studying the health of Mexican forests using both ground based inventory data and satellite imagery to monitor changes. The agency had been created a few years earlier out of concern for the non-sustainable harvesting of Mexico’s forest. Living in Mexico proved to be such an enjoyable experience that Will decided to stay and become a citizen, choosing Guadalajara as his new home.

Looking back on his long career as a geophysicist, Will is proud to say he was involved in a lot of groundbreaking work, publishing close to 65 research articles investigating motion along the San Andreas fault in California and other fault lines in the western U.S. He also developed one of the first detailed profiles of motion across the San Francisco Bay Area and an “outer coordinate” solution for analyzing motion along faults — innovations that are still being used today to assist in the detection of earthquakes. With colleagues, particularly James Savage, he was also able to develop models of motion at depth on faults to explain the surface observations.

Today, Will devotes his time to a range of personal interests and passion projects. When he’s not working with Trek Medics on the Beacon software platform, you’ll likely find him hiking along any number of famous trails around the world; in 2013 he was in Spain, walking El Camino de Santiago for the third time, a 1000-year-old pilgrimage that covers 800 kilometers. He’s also working hard to bring the Mexican expat community to the polls for the U.S. election and keep our democracy strong and participatory. You may also find him riding his BMW motorcycle from Guadalajara to Boston to visit his son, spending a month each year in Germany visiting his daughter before he hikes through the Black Forest, or mapping running trails in the infamous mountains of the Golden Triangle in Sonora, Mexico.

Wherever you may find him, you can rest assured he’s making the most of his time, consciously leaving the world a better and more stable place than he found it.