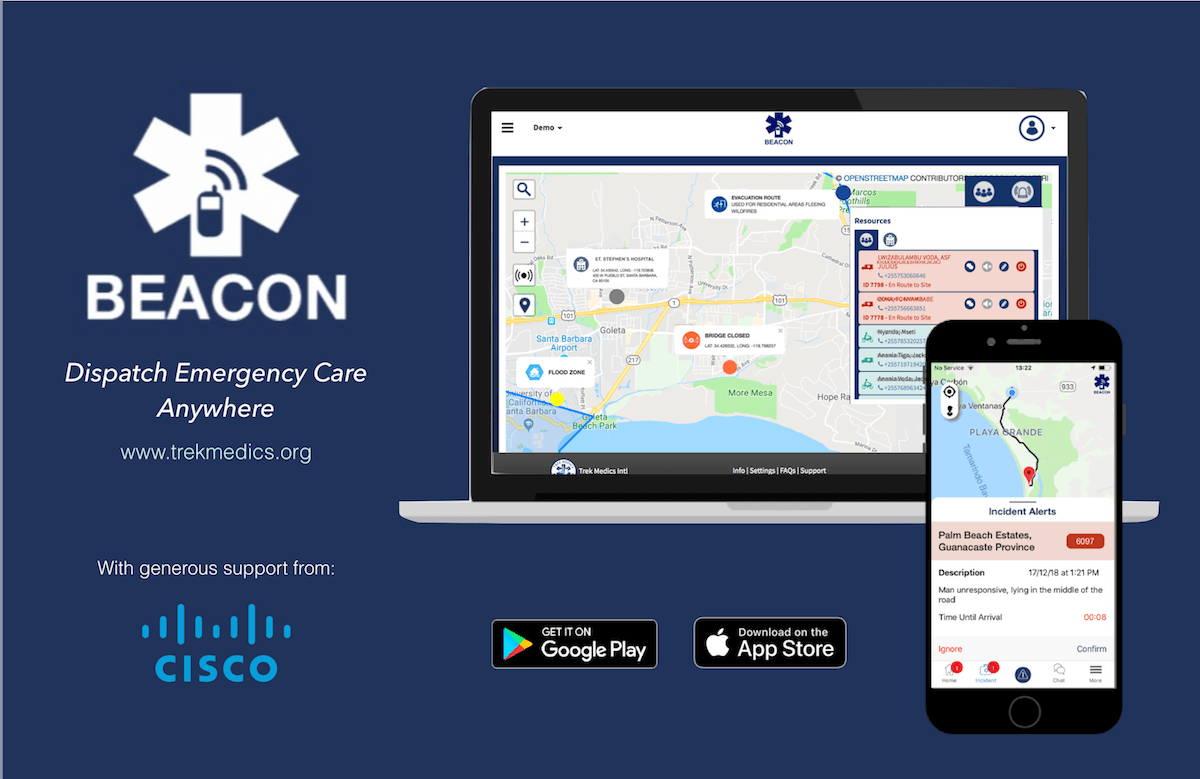 “Whether it’s hurricanes or wildfires or any other catastrophic event, time and time again we see that local communities need to be prepared to support emergency response efforts when formal resources are overwhelmed or knocked out,” said Jason Friesen, paramedic and founder of Trek Medics. “This technology grant from Cisco Systems has given us an extraordinary opportunity to equip communities to better coordinate disaster response activities at the local level for both professional and volunteer responders using any mobile phone.”

Originally designed for day-to-day emergency response services in resource-limited settings, Cisco challenged Trek Medics to find a way to make the Beacon platform relevant to disaster settings. The opportunity was not long in coming: over the next several months Trek Medics staff and partners in three different countries were directly involved in response efforts for hurricanes Harvey, Irene and Maria, providing a front-row seat to better understand how their platform functioned during hurricanes and how it could be improved for future use.

After presenting their findings, Cisco agreed the do-it-yourself approach was promising. “We’re excited to be supporting the development of new tools and partnerships to enable Beacon’s scale, and support community-level response operations in large-scale disasters,” said Erin Connor from Cisco’s Public Benefit Investment Group. “The planned feature developments will help Trek Medics reduce costs, drive scale, and enable organizations to pick up and use Beacon quickly – which is critical for emergency response.”

Among the features and functionality included in the new Beacon web portal will be the ability to create and annotate local maps, allowing dispatchers to update and share a range of pertinent information with responders on the ground via real-time maps, including landmarks, hazards, routes and zones. In-map directions for both Google Maps and OpenStreetMap have also been added to the newly released Beacon mobile app v3.0, as will group chat messaging. To make it easy for large groups to get started, the Beacon self-service web portal includes features to invite other responders to the platform and plenty of resources to teach them how to interact with the platform through the app in just minutes.

As part of Cisco’s grant, support is also being provided to deploy to disaster-affected areas to work alongside EMPACT Northwest (Seattle, WA) and All Hands (Boston, MA) as they engage directly with local communities and leadership to support response and recovery.