What can developing countries learn from the Boston marathon emergency medical response?

The medical response to the April 15 Boston Marathon bombings demonstrated a level of emergency preparedness almost any community could benefit from. The level of coordinated transport demonstrated in Boston can be applied near globally, and can be especially important where complex emergencies – comparable in both scale and severity to the Boston marathon – are increasingly commonplace.

The Democratization of Emergencies

For many, North America is not the first place you’d choose if you wanted to learn how EMS systems can do more with less. Yet one lesson that quickly became evident in the aftermath of the bombings was the fundamental principle driving Boston EMS’ response: outcomes from traumatic injuries are improved by increasing access to basic first responders with safe, rapid transport.

By almost all accounts, the ferocity of the bomb explosions inflicted more physical trauma than anything most eyewitnesses had ever experienced, so much so that one military veteran near the explosion described the scene as “the same exact thing” servicemen experience in IED attacks in Afghanistan and Iraq. Yet, despite the sheer carnage inflicted by the bombings, perhaps the most impressive thing that occurred that day was the medical community’s instantaneous response to collect, treat, and transport the wounded. Atul Gawande, medical correspondent for The New Yorker magazine, wrote a particularly compelling account of the response efforts, including eyewitness’ stories from the medical-tent-turned-M.A.S.H.-unit nearest the explosion, as well as from other medical providers on-scene and at the receiving hospitals. The medical response was so effective, Gawande wrote, “It now appears that every one of the wounded alive when rescuers reached them will survive. …Emergency medical teams mobilized en masse from around the city, resuscitated the injured, and somehow dispersed them to eight different hospitals in minutes, despite chaos and snarled traffic.” 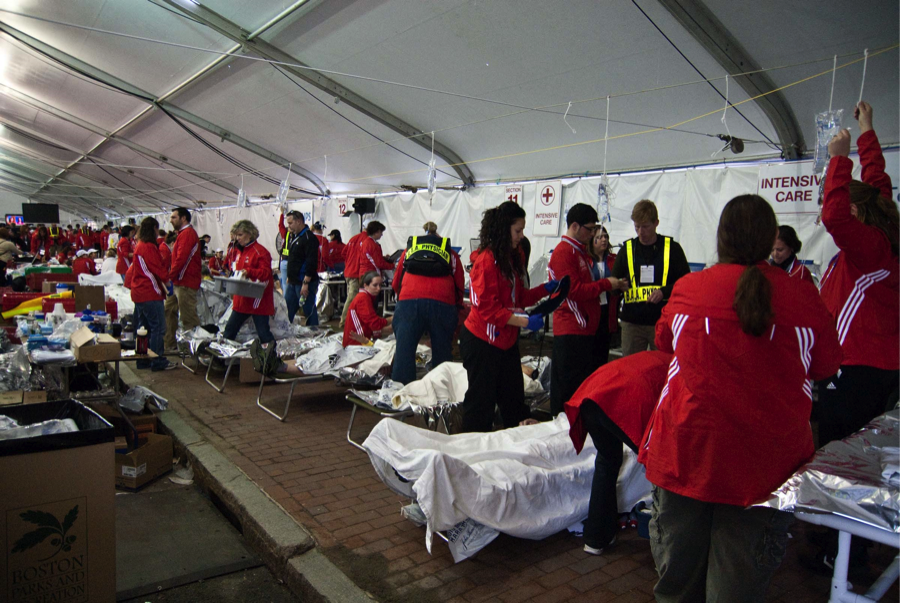 “Somehow” is a misleading, but not entirely inaccurate way to describe the performance of Boston EMS – especially given their place in the federal funding food chain. While true that, as Gawande added, the miracle of this response was supported by a massive influx of U.S. government funding for emergency preparedness in the years following the 9/11 attacks, it is important to note that much of that money was directed toward police, fire and hospitals, with only an estimated 4% going directly to EMS—and likely none for first aid tents at your local civic event.

But the critical role Boston EMS and supporting agencies played in the response efforts is worth more consideration; how else could enough resources be mobilized and coordinated within only a few minutes advance notice in order to transport nearly 200 injured and maimed patients to eight different hospitals across the city?

In short, the community’s emergency medical response system worked as it was supposed to: The plans that had been designed and developed to cover the entire 26-mile course were coordinated with existing transport systems, and together they proved effective in pulling together resources from multiple agencies across the greater Boston area.

When coordinated services do not exist – when first responders do not exist, and when adequate transport is not readily available – the gruesome scenes that unfold, and drag on, often for hours, can be utterly devastating to both families and communities. Yet, in significant portions of the developing world, tragedies of this scale and severity are becoming increasingly common, if not altogether routine. Fortunately, a lack of 100 ambulances does not preclude an effective emergency system.

The Fine Line Between Resilience and Mitigation

The lessons from Boston that are applicable to any EMS system are basic, simple, far less costly than the seemingly endless line of ambulances demonstrated at Boston:

Community training: “When he saw a woman with an open tibia and fibula fracture, he created a splint out of a poster and two slats of wood from a fence barrier.”

Community planning: “Boston’s health care providers reacted the way they did because they knew what they were supposed to do. Those who did not were smart enough to follow the lead of those who did. That’s how a “ritualized” disaster plan works”.

Community volunteers: “When we see that kind of spirit, …there’s something about that that’s infectious… You’ve inspired an entire country. You’ve inspired the entire world.”

These three areas work hand-in-hand, and can provide a valuable framework for even the smallest communities to reduce preventable death and disability across a range of emergency medical conditions. Just as the Boston Marathon first aid tent went from treating patients for dehydration, to trying to prevent exsanguination, communities with fewer available resources are likewise able to prepare for their own complex emergencies by providing basic first aid training, coordinating their delivery, and recruiting as many people as possible to participate.

Empower the Youth: “They were off before I could blink“

Community-driven emergency response is how critical patients get from the scene to the hospital. It’s already happening whether there are ambulances or not. And just as the Boston Marathon’s emergency response system leveraged existing resources to prepare, so too can communities in developing countries strengthen the systems already in use with basic, yet effective improvements. Otherwise, without even the most rudimentary plans to treat and transport the wounded, even the best-funded hospitals will be of minimal use to patients whose physiological condition has deteriorated too severely, only further contributing to alarming trends of preventable death and disability.

The best takeaway for developing countries from the Boston response may very well be found at the finish line, just after the first explosion: In video footage recorded by the finish-line camera, two young EMTs, less than one minute after the first blast, are seen running back over the finish line toward the explosion — two young first responders crossing the proverbial Rubicon with little more than a gurney, a trauma bag, and two pairs of gloves.