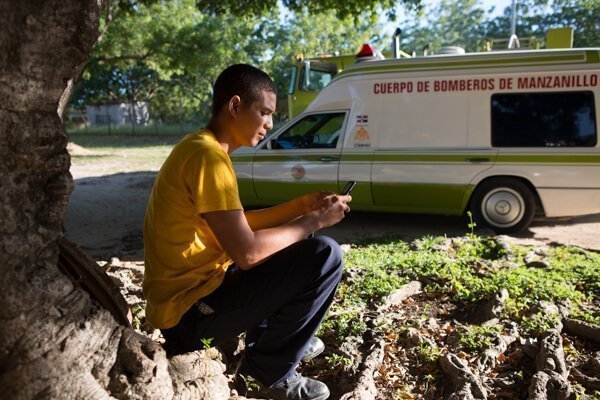 An Urgent Need for Innovation

Have you ever tried to call for an ambulance in a developing country using a simple number like 911? Turns out it’s very difficult to do so in the majority of the developing world, says Trek Medics’ founder and paramedic, Jason Friesen. “For a community to have 24-7, door-to-door ambulance services like we do in the wealthiest nations, they need two things: lots of money and good roads. Without those, our systems are too expensive to sustain so alternative solutions are needed.”

Taxi Drivers Save Lives – So Train and Equip Them

Trek Medics’ approach to 911 system development is based on the belief that high-tech EMS systems used in the wealthiest countries are comprised of three basic things: people, transportation and phones. “Few societies willingly leave their sick and injured by the side of the road,” Friesen notes. “People are being transported to the hospital across the world daily, usually in taxis or pick-up trucks – even rickshaws – and they’re already calling to report emergencies through these basic phone trees that are wholly unreliable but surprisingly robust.” Focusing on the basic infrastructure already available, Trek Medics’ team of paramedics and software engineers began developing the Beacon prototype in 2012, and soon started working with a group of volunteer responders in Haiti and earned Beacon a comparison to an Uber-like emergency service in a Time.com article. The comparison stuck and others began to take notice. At the beginning of 2014, Trek Medics begin meeting with Google.org, which seeks out and supports innovative technologies that have a social impact and the potential to scale. “Formal emergency response systems are expensive and take time to implement, making it difficult at times for people to access care,” said Jacqueline Fuller, Director of Google.org. “We’re hopeful that the system Trek Medics is developing will prevent death from treatable injuries by providing an alternative for remote areas around the world.”

With the world’s poorest countries devastated by extraordinarily high fatality rates from preventable causes like injuries and complicated childbirths, solutions like Beacon are desperately needed. According to the World Health Organization, more than 90% of the world’s road-traffic fatalities occur in developing countries, with the Dominican Republic earning distinction as “effectively the deadliest nation anywhere for drivers” – statistics Trek Medics believes have a lot do with a lack of access to reliable care. In 2006, however, the World Bank and Bill and Melinda Gates Foundation published an extensive analysis on health systems strengthening in developing countries and determined that sustainable, emergency medical services could do a lot to reduce premature death and disability. “We are both grateful and encouraged to have Google,org onboard as our latest partner,” Friesen said. “Google knows the potential, powerful impact that simple technologies can have in the developing world, in terms of empowering and connecting communities. There’s much that can be done to improve emergency medical services in impoverished countries, and many lives that can be saved.”